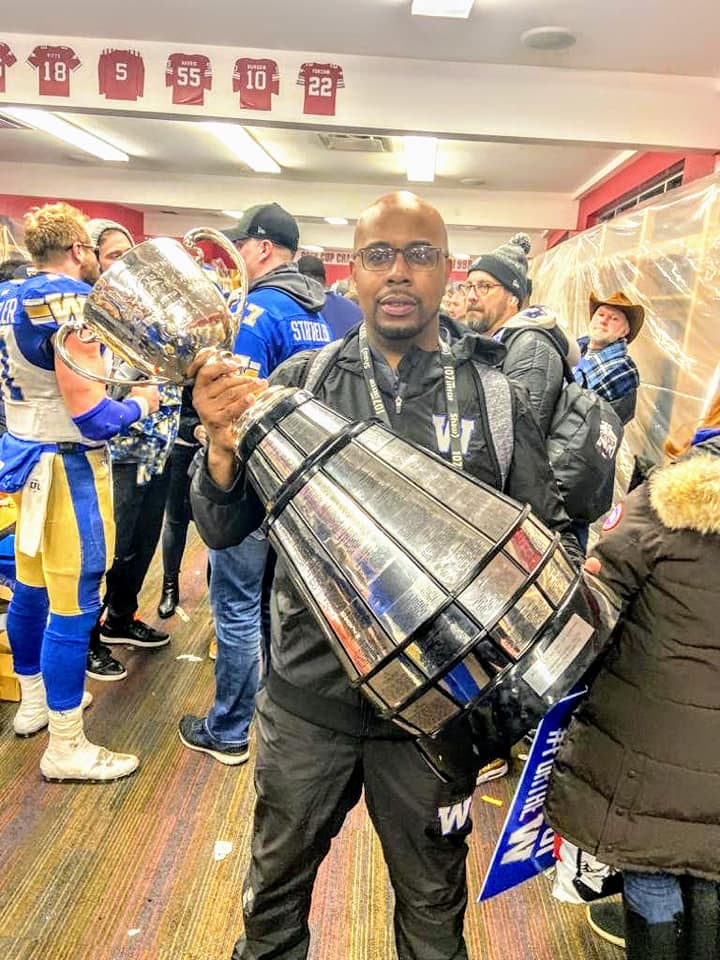 James Stanley‘s resume speaks for itself.  Joining the Winnipeg Blue Bombers of the Canadian Football League in 2018 as a defensive assistant, his presence was immediately felt, as the club finished second in points, touchdowns and passing touchdowns allowed while continuing to be the league-leaders in forcing turnovers. Not satisfied with stats alone, Stanley, then played a significant role as the Blue Bombers captured the Grey Cup in 2019 with a 33-12 victory over Hamilton. The Grey Cup is the CFL’s Super Bowl. “This was very gratifying”, said the 1997 Jackson High School graduate.

“Winning the Grey Cup validates the season”, said Stanley “The long hours, sleepless nights, high & lows along with the roller coaster emotions make it all worth it. In the end when you win the championship knowing that you are part of history and your team made it the top is a surreal feeling.  To see the joy and happiness on the faces of players, coaches and fans is unforgettable and something I will take with me for the rest of my life.”

This year’s Grey Cup victory was somewhat bitter sweet for Stanley because it was against his former team. “Playing against my old team, that I coached with for 5 years was a unique feeling. I lost 2 Grey Cups with Hamilton,  I understand the pain and disappointment that they were feeling. I’m still close friends with a lot of the coaches and players on the team, so seeing that sour look on their faces was tough. However at the end of the season there can only be one champion and I’m proud of the way the Winnipeg Blue Bombers played.”

This was not Stanley’s first trip to the CFL’s mountaintop. He was on the winning team, as the linebacker coach, in 2012, when the Toronto Argonauts captured the Grey Cup. “I have actually coached in four Grey Cups in nine years”, commented a modest James Stanley, Jr. “I’ve won two and lost two.”

A product of Jackson Public Schools, Stanley was a 3-sport letter winner as a Viking, playing basketball, running track and starring in football, which earned him a scholarship to Toledo University. Earning his degree in administration, the kid who grew up on Williams street, never forgot his humble beginnings. “I played for Exchange back in the day. Chilly Willy was my coach, along with Brian Breedlove, Jason Williams, and Maria McClendon These guys, along with my Parkside and Jackson High coaches had a hand in helping me get to where I am today”, said Stanley. “Jackson will always be my home”.
Stanley spends much of the off season in Jackson with his father, James Stanley, Sr. He credits his parents with providing that solid foundation and value system growing up that allows him to be the man he is today. “His success today, shows that he did listen to me as a kid growing up”, said his father, James Stanley, Sr. I’m proud of the way he conducts himself. I supported him then and he still has my support today.”

Growing up in Jackson, Stanley has not separated himself from success and those with a dream. “The main message that I want to disseminate, especially to the young people, is, YOU CAN DO IT TOO”. Spending much of the off season in Jackson, Stanley makes himself available to any and all desiring his expertise. “If kids want to do drills, go to the park or just ask questions, I take pride in making myself available.”

“It’s important for young kids to see successful people who look like them” said Basil Hampton. “When it’s hands on, it makes all the difference in the world.” Asked what advice does he have, Stanley quickly responds, “Believe in yourself and work for it and your goal is attainable”

Stanley played four seasons of professional indoor football, from 2004 to 2007, with various teams in the Arena Football League (AFL), AF2, National Indoor Football League (NIFL) and American Indoor Football League (AIFL), and was selected with the first overall pick in the AIFL draft in 2005.
Stanley coached in three consecutive Grey Cup games from 2012 to 2014. Stanley became the team’s defensive backs coach in 2013 after helping the Toronto Argonauts capture the 100th Grey Cup as linebackers coach in 2012. Prior to coaching with the Toronto Argonauts, Stanley began his Canadian Football League (CFL) coaching career as a defensive assistant with the Calgary Stampeders in 2011, working primarily with the defensive backs.