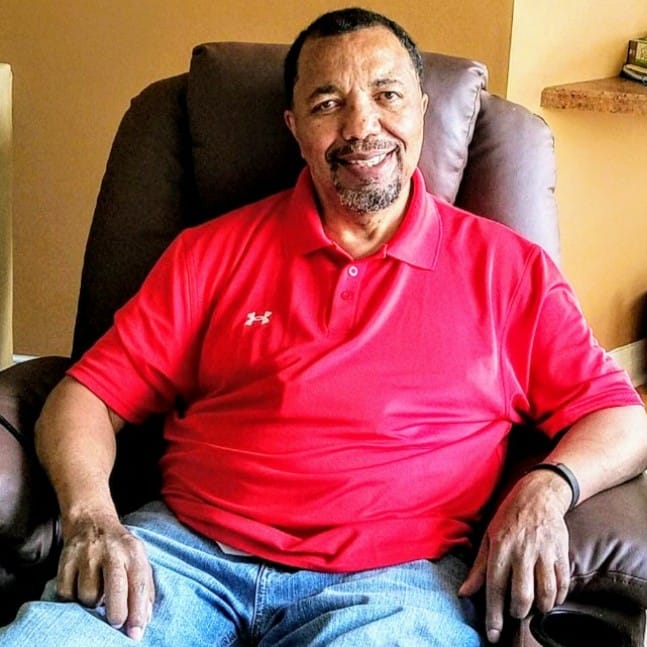 James Melvin Stanley Sr. returned to his Heavenly home on August 1, 2020, surrounded by his loving children and grandchildren. His devotion to his family and his firm belief in God were the cornerstones of his life and a constant source of comfort. James was born May 7th, 1952 in Eastman, Georgia. As the only son born to the union of his late parents, Rev. Napoleon and Dorine (Kinchen) Stanley, he grew up surrounded by the love and affection of six doting sisters. Throughout his life, he was affectionately known by family as “Candy Boy” and “Candy Man”, because of his sweet, gentle demeanor. The family relocated to Miami, FL in 1954 where he was raised immersed in the Christian faith from an early age. He attended Miami-Dade County Public Schools and graduated from Miami Jackson Senior High School in 1970. He later obtained an Associates Degree from Miami Dade Community College and took classes at Jackson Community College. James always had high aspirations for his life and was willing to do whatever it took to accomplish his dreams, even if that meant leaving sunny Miami for Detroit. James relocated to Michigan in 1974. He worked for Finance America before securing employment with Consumers Power Company in 1980. He held a numerous positions, gradually climbing the career ladder to become a Computer Analyst. James was well liked and respected by his coworkers and retired from Consumers Energy in 2012 after 32 years of service. James was also blessed with an entrepreneurial spirit and put his skills and hard work ethic to use to open and operate, “Cascades Janitorial”, “Ebony Gift Gallery”, and JS Computer Repair. James was joined in holy matrimony with Alice (Stocker) in December 1984 and remained her dedicated, loving husband until her passing in June 2009. The two enjoyed spending time with their blended families, traveling, gardening, and faithfully serving their church and community. James considered fatherhood one of his greatest endeavors. He was never shy about expressing his pride and joy over the accomplishments and selfless devotion of his daughter, Tiara and son, James Jr. He was a proud grandfather to his three grandsons, Jaden, Jamir, and Justin. He enjoyed family trips and attending football games. He was an avid fan of whichever team his son/grandsons coached or played for. He was an active member of several organizations throughout the years. Most recently, he was affiliated with the local chapter of the NAACP and the Southern Michigan Pro Duffers, of which he was the first treasurer and a loyal, faithful charter member. He was also a long-time member of Southside Baptist Church, where he tirelessly served in various capacities throughout the years. James believed in living life to the fullest. He was intentional about savoring the precious moments of every day he was blessed to have. Though Parkinson’s disease may have ultimately limited his health, he never allowed it to break his spirit. Survivors cherishing his loving memory include his devoted children, Tiara and James Stanley Jr., stepdaughter Camille Jones, Grandsons, Jaden, Jamir, and Justin Stanley, Seven sisters; Joyce Trobridge, Betty Green, Anna Pear Ross, Carolyn Stanley, Debra Shootes, Evelyn Baker, Jackie Dixon; One brother, Jerald Washington, Caregiver Rosemary Moore, and a host of Nieces, Nephews, Aunts, Uncles, Cousins, and Friends.